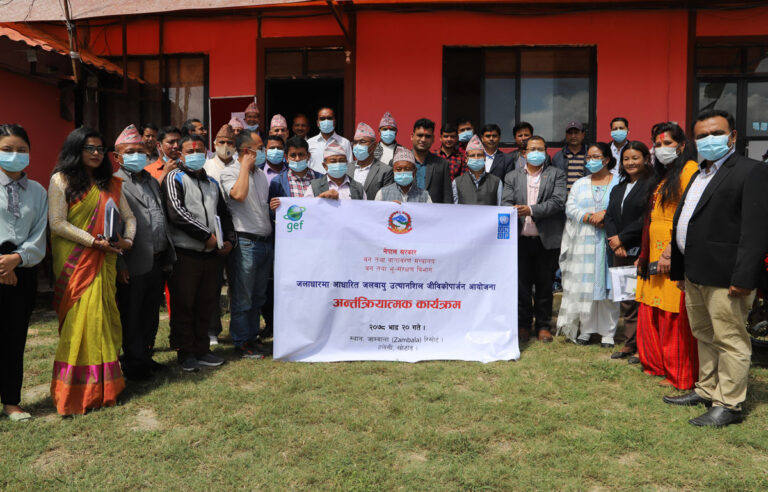 A workshop on Developing Climate Resilient Livelihoods in the Vulnerable Watershed in Nepal (DCRL)’s project orientation was held on 5th September 2021 in Halesi, Khotang. Representatives from the Ministry of Forests and Environment, the District Coordination Committee, Mayors, Vice-Mayors, the Chairperson and Vice-Chairpersons, Chief Administrative Officers from local governments, Division Forest Officers, representatives from the Soil and Watershed Management Office, the Basin Management Centre, and the Federation of Community Forest Users’ Nepal met on a common platform to share and discuss climate-related vulnerabilities in their community, project roles in addressing the issues, and gain a better understanding of the project.

During the one-day workshop, Dr. Prem Prasad Paudel, National Project Manager, DCRL had mentioned that climate-related vulnerabilities such as landslides, drought, and flooding are prevailing in the Dudhkoshi watershed. Mr. Paudel explained that the DCRL project is aiming to address climate induced problems such as increasing exposure of people and their livelihoods to the impacts of flood and drought hazards, in Dudhkoshi watershed that is degraded and poorly managed. Dr. Paudel said that the project intended to safeguarding vulnerable communities and their assets from climate change-induced disasters by applying a long- term, multi-hazard approach. Promoting watershed friendly livelihoods practices, afforestation, multi-purpose water retentions structures, watershed rehabilitation initiatives, building institutional capacities, and integrated watershed management are among the activities planned to address the local climate induced vulnerabilities.

The baseline study completed in 2018 revealed that people living in the Dudhkoshi watersheds are mainly dependent on agriculture for their livelihood, with average land holdings of 1.2 ha per household. 80% of the households have food secured for 3-6 months, and 70% rely on traditional wells for drinking water as other sources have dried out or their distribution network has been destroyed by floods and landslides. Fifty-seven major landslides in Dudkoshi watershed were recorded between 1981 and 2004 resulting to 30 deaths and destroy of 43 houses and 1500 Ropani of farmland. Drought is by far the biggest disaster risk in the watersheds which results in significant loss of crops and increase in price of produce, which leads to food insecurity.

The project area is focuses in the confluence of Dudhkoshi and Sunkoshi at the boundary between Khotang and Okhaldhunga districts that comprises 844 km2, 8 local government units, and 51 wards, targeting to 121,606 population. The project is being implemented by the Department of Forest and Soil Conservation under Ministry of Forest and Environment with the total budget of 7.9 million USD excluding 34.9 million USD co-financing from Government of Nepal started on December 1, 2020, and will end on May 1, 2024.

Attendees had raised concerns on co-financing from the Government of Nepal, activity implementation modality, sustainability of the activities, and strategies for completing the project on time despite the delays incurred.

Ms. Bimala Rai, Deputy Mayor of Halesi Tuwachung Municipality said ” Traditional skills have been used by women and socially excluded groups in the Dudhkoshi watershed to generate income from natural resources. However, as these resources dwindle, such as the drying up of nearby water sources, their daily lives are gradually changing as well. Water scarcity has a wide range of consequences, including increasing the burden on women and socially marginalized communities who live on the outskirts of villages and face additional challenges”. She added that that the project must include women and members of disadvantaged communities in its activities in order to improve their livelihoods and adapt to the effects of climate change.

Mr. Badri Raj Dhungana, Member Secretary of President Chure Terai Madhesh Conservation Development Board said that ” a long-term solution to the climate change problem is to rehabilitate and maintain functional integrity of watersheds that have critical functions of water storage and release, infiltration, drainage control, and soil moisture retention”. He added that watershed management has become an increasingly important issue in mid hills of Nepal such as Dudhkoshi watershed, as part of the integrated landscape management approach.

Mr. Gyanendra Kumar Mishra, Under Secretary from the ministry of Forest and Environment in his remarks shed light in the importance of local government role on project implementation, monitoring, supervision, guiding and quality assurance. He stated that, despite the fact that this is a pilot project, there is no reason for it to fail. The Government of Nepal intended to apply the project’s lessons learned and achievements to other critical drought-prone watersheds in Nepal.

Participants from the local government kept their aspirations to begin immediately field level activity implementation and expressed their willingness to support with project implementation. Mr. Babi Chamling, Chief of DCC, Khotang and the meeting’s Chief Guest, stated that “the selected Palikas for project implementation are vulnerable to multiple hazards such as landslides, floods, and drought.” Mr. Chamling suggested that the activities be aligned in order to address the existing vulnerabilities. He added that the local government, including the DCC team, has committed to support, coordinate, and collaborate throughout the project period.

“The DCRL project in Dudhkoshi watershed has a scope to visualize a substantial impact on watershed management in the drought-prone land,” Mr. Nabin Giri, Deputy Director General of the Department of Forest and Soil Conservation said.  He added that the project will make a significant contribution to addressing the existing multi-hazards affecting people’s livelihoods by improving climate resiliency. 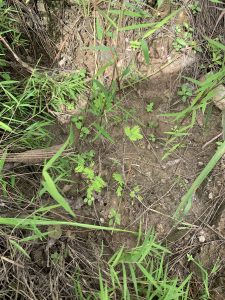