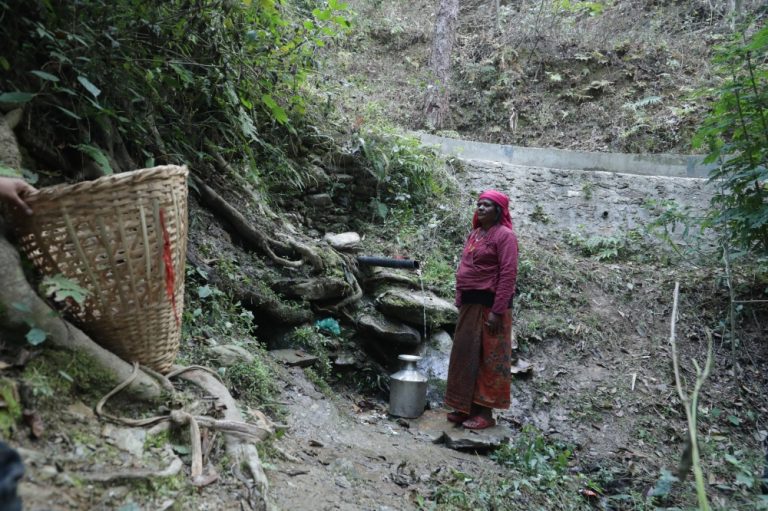 Climate change has a significant impact on freshwater sources, reducing the availability of water for domestic and productive purposes. The consequences of increased frequency of drought, floods, and landslides are far-reaching, particularly for vulnerable groups such as women who are taking care of household water management. Around 1.6 billion people, or nearly a quarter of the world’s population, face economic water scarcity, which means they lack access to water infrastructure (UN-Water, 2014). Water scarcity is expected to worsen in the future, with around 52 percent of the world’s population living in water-stressed areas by 2050, according to studies (Kölbel et al., 2018).

The majority of the landscape in Okhaldhunga and Khotang districts of Province 1, Nepal is characterized by a steep average slope. Each of the four watersheds in these two districts is characterized by a steep average slope > 300 with 39%, 37%, 41%, and 48% of land area in Dudhkoshi, Molung, Likhu, and Sunkoshi Canyon respectively, having slopes. More than 51% of the cultivated land is between 30 to 60-degree slopes. About 43% of the forest is below a 30-degree slope (DCRL’s Baseline Study Report, 2018).

Drought is one of the major disasters caused by climate change in Nepal’s mid-hills, and it is quickly becoming one of the most serious challenges. Drought affects agriculture and rural livelihoods immediately. According to local residents and local government representatives from Siddicharan municipality, Okhaldhunga, and Halesi Tuwachung Municipality in Khotang districts, the majority of villages in these districts are severely water-stressed. Uses of dozers and excavators while constructing motorable roads is affecting water resources. (source:https://www.cbd.int/financial/micro/nepal-indigenous.pdf). According to community people, traditional ponds near settlements in Okhaldhunga and Khotang districts are drying up, with some collapsing as a result of infrastructure development, primarily motor roads. There is less groundwater recharge from rainfall due to the steep slope and thin layer of topsoil. Because rainwater flows into rivers, soil water absorption is reduced, resulting in a decrease in groundwater recharge. Low recharge results in low soil moisture content, which reduces soil productivity. According to the Hydrometeorological data of the Department of Hydrology and Meteorology (DHM); Okhaldhunga and Khotang districts show that mean annual precipitation is less than the national average of 1,857.6mm, extreme rainfall in 24 hours is extremely high, and the annual precipitation trend is decreasing. A long record of 24-hour extreme rainfall data available shows that there has only been one event exceeding 100 mm of rain in the last ten years.

Man Bahadur Khatri (56) resident of Manebhanjyang Rural Municipality-5, Okhaldhunga said, “herders used to bring the livestock for water feeding in the pond called Bhorleko Pokhari and grazing in the vicinity of the pond.” Herders used to swim in that pond on sunny days. Children used to swim in shallow water at the bank of the pond because the middle of the pond was deeper than 7 meters. There were few trees in the middle of the lake, but now the pond’s bottom is completely dry now, and even the soil can’t hold enough rainwater during the rainy season. The 150 households in the surrounding area have been struggling to provide water to their livestock these days.”

Som Bahadur Biswokarma of Siddhicharan Municipality-4, Rumjatar has had similar experiences. “The traditional natural water sources were providing adequate water to the villagers 15 years back, but there is now a severe water shortage. Winter is even harsher. Due to insufficient water supply, people hardly get irrigation facilities, and villagers are gradually abandoning livestock rearing.” He added.

Women and girls bear the burden of fetching water for their families all over the developing world, including Nepal, and spend significant amounts of time daily hauling water from distant sources. Water from distant sources is rarely enough to meet the needs of the household and is frequently contaminated, so women and girls bear the brunt of the consequences of poor sanitation.  They are more likely to spend longer periods collecting water from more distant sources during droughts, putting girls’ education at risk due to reduced school attendance.

Lalimaya Pariyar of Siddicharan Municipality-4, Okhaldhunga wakes up at dawn, places a water vessel in a bamboo basket, and walks 15 minutes into the forest to a water source called “Lokil Kholsi. Lalimaya explained “I have to fetch water more than five times a day. I spend 3-4 hours a day fetching water, and my neighbors do the same. I’m experiencing body pain and backache as a result of the water-fetching workload. If there was a drinking water tap near my house, I wouldn’t have to go through all of that pain every day.

Taradevi Rai of Tilinge village, Siddicharan Municipality-4, Okhaldhunga is reliant on a water source near earthen motorable roads. The water source is on the verge of being submerged due to a landslide that occurred just above the water source. Until now, a few gabion boxes have been placed to prevent the landmass from collapsing and protect the water source. However, as the area is prone to landslides, the water source could be buried at any time. Taradevi said “People began queuing as early as 5:00 a.m. I spent the entire morning fetching two water vessels. Water fetching has been a challenge for women from more than 20 households in this area. The entire village is suffering as a result of water scarcity.”

Sita Majhi of Rawabeshi Rural Municipality-1, Khotang, collects wastewater from the tap and deposits it in the waste collection pond to irrigate the kitchen garden. “I have land for farming but not enough water for irrigation,” she lamented. Because the river is flowing downstream, we cannot irrigate the land by carrying water from the river. If there is an irrigation system, the dry agricultural land can be watered, and people like me in the village can increase our income by selling vegetables.

People from Okhaldhunga and Khotang have been suffering from water scarcity as a result of less water available and poor management of available water. To deal with the water scarcity, community people have started some initiatives to deal with the adverse effects of climate-induced drought. Some of the initiatives undertaken by the community include wastewater collection and utilization, plastic pond management, drip irrigation, plantation, and cropping pattern changes.  Likewise, some water lifting schemes have been initiated by local, provincial, and federal governments; however, they are insufficient in number and volume.

The role of local government in addressing climate-related disasters, including drought management, is critical. A local government’s priority could be the development of integrated climate-friendly watershed management, climate change, and disaster risk management policies to aid in the response to climate-related disasters. Similarly, assessing the impact of climate change in various thematic sectors at the local level, developing relevant plans, and putting them into action can help to address the effects of climate change. Importantly, mainstreaming climate change issues into local development plans and policies is critical to achieving resilient development. Collecting and implementing indigenous knowledge, skills, and practices that are effective for climate change adaptation, watershed management, and disaster risk management, as well as capacity building and meaningful participation of women, indigenous people, and disadvantaged community members in planning, implementation, and monitoring, all contribute to addressing the adverse impacts of climate change at the local level.

Developing climate Resilient Livelihoods in the Vulnerable Watershed in Nepal (DCRL) https://dcrl.dofsc.gov.np/ has been implemented in eight local rural/municipalities of Okhaldhunga and Khotang districts aiming to safeguard vulnerable communities and their assets from climate change-induced disasters by applying a long-term, multi-hazard approach – with a particular stewardship role for women and marginalized communities. The project has been working on water stress management and promoting the climate-resilient livelihood of vulnerable communities through various relevant interventions.

UNDP has been supporting climate-resilient development, reducing climate change vulnerability of vulnerable people and communities across the country, and assisting disaster risk management at various scales through the implementation of projects such as the Comprehensive Disaster Risk Management Program (CDRMP), the Nepal Climate Change Support Programme (NCCSP)-Phase I, the Community Based Flood and Glacial Lake Outburst Risk Reduction Project (CFGORRP), and the Ecosystem-Based Adaptation (EbA)-Phase I and other similar projects. 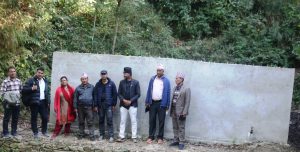